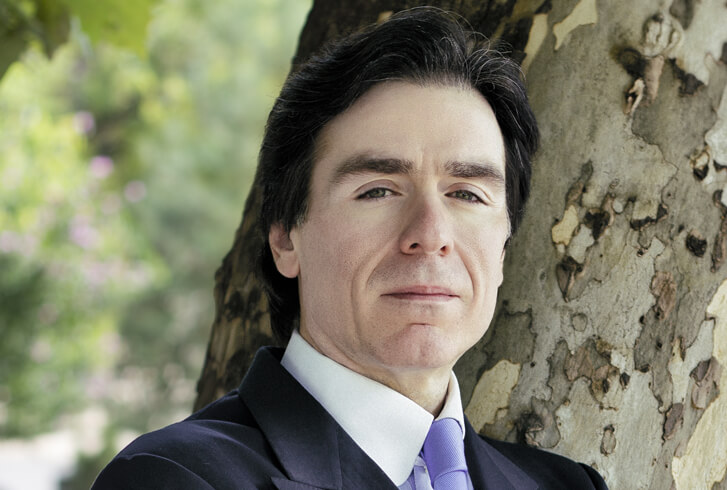 French-brazilian Director, writer and composer Maximianno Cobra was born in Rio de Janeiro,Brazil.  From a very early age he discovered his passion for film seeing Fritz Lang's silent masterpiece "Metropolis" (1927); initializing a lifelong fascination with German expressionism.  Spending much of his formative years absorbing the great works of cinema, his understanding of storytelling was enriched after watching Fellini's "Amarcord" (1973),  Kubrick's "2001: A Space Odyssey" (1968) and Orson Welles' "Citizen Kane" (1941); but it was a love of Olivier's "Hamlet" (1950) that first ventured him into the magnificent world of Shakespeare.  “Discovering Shakespeare was" - in his own words was - “an existential upheaval. He impacted me the same way Bach's music had."
Beginning his career as an orchestra conductor, it is here Maximianno learnt the “essential value of the text as the epicentre that leads a performing artist to build the spiritual and physical life of either a music score or a character”.  During his early professional years, in synergy with his experiences in the field, Maximianno attended acting workshops and conferences on Stanislavsky’s method (notably with director Sergio Brito and theatre practitioner Augusto Boal, founder of the theatrical concept of 'Theatre of the Oppressed').  From them he learnt the need to reach and explore "humanities dark and unknown regions; to let all subliminal moment happen from within the process of storytelling and narrative."  This experience constituted, for him, how a director views presenting a story

At seventeen Maximianno earned a grant to study conducting and composition in Europe, at Vienna's Music and Performing Arts University.  In parallel with his education, he also began exploring his passion with directing, awakened during his adolescence by Sergio Brito’s theatrical production of  "King Lear".  True to kismet, his first production was also Shakespeare's "King Lear", performed in both English and French, for a Parisian theatre company.  “Directing Shakespeare or conducting Bach is, each and every time, a symbolic rebirth. As long as we accept to open our mind and heart, they have the ability to transform both performing artists and audience into phoenixes.”  Upon graduation he toured France with the Hungarian State Opera and the Budapest Philharmonic Orchestra; later joining the Europa Philharmonia, a newly-founded ensemble bringing together Europe's elite orchestra musicians for studio recording projects using the latest media technology.

In 1993 Maximianno was hired as producer and audiovisual director of a concert series for the Ministry of Culture's public television channel; featuring the Brazilian Philharmonic and the Brazilian Symphony Orchestra, under his direction.  This led to a follow up on European TV and cable network of a new piece "Ode to Joy: Beethoven - Symphony No. 9 Op. 125" which quickly became a best seller.  The experience of directing for camera, as opposed to stage and concert, began to gestate in his mind; leading to his first initial draft adapting Shakespeare's "Timon of Athens" for film.  "I had an intrinsically long relationship with the play and, above all, with its timeless themes: the challenge of social hypocrisy, disillusion and annihilation against the poetics of friendship, love, and beauty. Not to mention an early fascination, since I was a teenager, about Ancient Greece and classical Greek theatre."

While he continued to tour Europe conducting the Budapest Philharmonic Orchestra, Maximianno further developed his directing on stage, especially his passion for Shakespeare, bringing to life productions of "Richard III", "The Picture of Dorian Gray" and "Macbeth".  During this time Maximianno also earned his Ph.D in Musicology and Music History from Paris IV University; culminating in being appointed Artistic Director of the Shakespeare Network Audiovisual Project.  Under his leadership they focused on stage performances, audiobooks, documentaries and films; and for his achievements with the company Maximianno was awarded seven ICA awards and five IAG Recording Award.

In 2011 he directed the TV series "The Mahler - Klimt Project, A Gustav Mahler Centennial Celebration", followed in 2012 with directing the short film "Sense: A Small Tribute to Federico Fellini". At long last Maximianno was able to honour not just one of cinema's greatest directors, but someone who had influenced his own passion in film-making from such an early age.  "Maestro Fellini, like any other master, understood 'a little more' about the meaning of life than anyone of us."

In 2017 Maximianno entered pre-production for "Misanthropos", bringing to fruition over a decade worth of dedication to adapting Shakespeare's "Timon of Athens". After more than a year of auditions (personally casting each actor), gathering crew, being heavily involved in stage design and the music score, as well as two years of rehearsals.

He has been appointed Artistic Director of the Shakespeare Network Audiovisual Project (AudioBooks, VideoBooks, Stage Performances, Documentaries, Films) and has been nominated and awarded for his phonographic and audiovisual achievements. ICA - "Anthological" - "Creator" Recording Award - IAG - "Must" Hi-Fi Recording Award.